Patty loses an aunt and gains a brother

Spoiler Warning: This is based on Orphan Trouble, the adventure in the Buffy/Angel RPG supplement Magic Box . 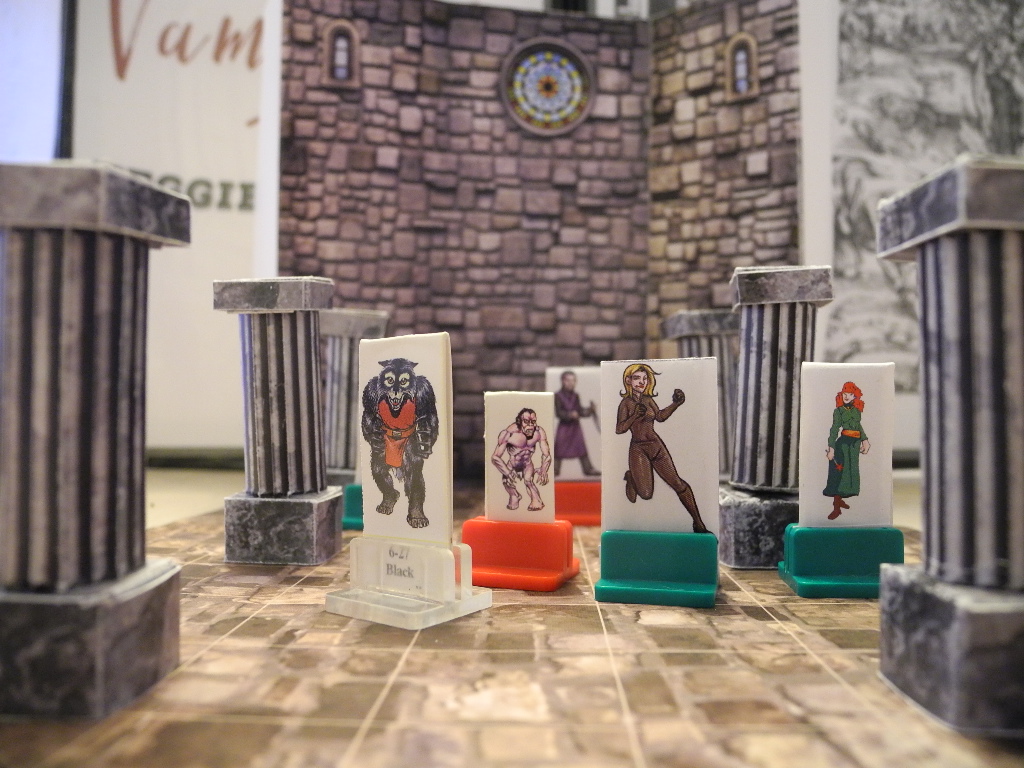 The bus rolls into Patty’s home village of Gyote St Mildrith, to prepare for the village fair. Patty, Elli, and new hire Katrina Linberg stay with Patty’s parents. Hours after they arrive, the home is disrupted by the tragic accidental death of Patty’s maternal aunt.

Patty’s parents were godparents to the aunt’s recently adopted son, and so Patty’s family return from the funeral (in County Durham, the other end of England) with a new brother, Billy. (Patty’s plan to take the bus is turned down.)

Patty throws herself into the role of big sister, sharing her old games console. Freya’s daughter recently left home, and Katrina compares Billy to her as “sweet, deeply loving, and slightly rumbunctious.”

But Billy is very rumbunctious. He runs through the house opening drawers, including Elli’s magical accoutrements. He break’s Patty’s game controller. When playing with kids, he’s accused of pushing a girl.

And Patty’s parents are uncharacteristically lenient. They don’t just tolerate the behaviour, and get him a puppy (her dad had been thinking about it for a while), but force the girl to apologise for “lying”.

Patty tries to get the boy counselling, and initially her welcomes her mother’s chilled out style. But when Elli tries to raise him going through her stuff, Patty’s mum reminds her she’s a guest in Billy’s home, and repeats his suspicions about some of the “black magic” stuff she found.

In private, Elli begins to call him a “demon child”, and the trio start to consider leaving.

Things come to a head the following morning. Elli finds a spider in her shoe and, more seriously, marbles on the stairs.

Billy had played very roughly with the puppy, and Patty has to go hunting for her. When she finds her loitering in Elli & Patty’s room. Looking closely, she finds scratches. That’s when she decides they’re leaving. With the puppy.

Confronting her mum in the kitchen, her mum doesn’t take things well. Mum loses her temper, growing into .. a werebadger. (It’s hereditary.)

There follows a struggle to get out with the puppy without hurting anyone. Dad and Katrina (who is still being very defensive of Billy) try to guard Billy.

Were-mummy blocks off the front door.

Patty is tripped up by some toy cars (that, Katrina notices, were not there a few moments earlier), and is held down, prone, by her mother. At this point she goes badger.

Elli grabs the puppy with one hand and holds Were-mummy off with a spell with the other.

Then, to get Were-mummy off Elli, Katrina jumps onto the were-badgers back and manages to restrain her. This buys the time for everyone to leave.

On the way to regroup at the bus, they notice a weird man with a black/gold medallion watching them.

They regroup at the bus, and introduce themselves properly. Patty explains about her family history, Elli about the Pythagoreans, and Katrina describes her awkward history of odd men nagging her about being a slayer.

This provokes comments of “That’s useful” and “You’re hired permanently”, off a worried look from Katrina.

They crash with Patty’s old friend Charlie the publican, and make a start on research. Patty discovers that her relatives all describe him as “sweet, deeply loving, and somewhat rambunctious”, and the adoption agency had already shut down. Although the underworld is not short of powers to pass as human and/or mind control, Elli persuades her fellow Pythagoreans to give her a spell to reveal all magical effects.

Katrina notices the weird man out of the window, and the three give chase. After a while, and a series of spells to befuddle, escape, and avoid them, they manage to grab a few words. He sneers that they should stop interfering, and blames his family from excluding him, before teleporting away.

Sand in the Carpet

Next, they visit Patty’s home again, noticing missing cat posters on the way – and an ambulance arriving. Her dad is being carried out on a stretcher. He fell down the stairs and broke a leg, and although Mr. Hakuta is sanguine, one of the paramedics comments that it could have been much worse.

Whilst Katrina and Patty go into the kitchen with Patty’s mum, Elli tries to prepare her ritual with a circle of sand.

But Billy swiftly runs to her, kicks the sand, and shouts “Mummy, she’s doing black magic!”. This swiftly descends into another argument, and into another werebadger fight.

Katrina manages to grab hold of Patty’s mum. Billy advances on Katrina with a knife, to be frozen by a spell from Elli.

Elli needs another two goes to get her spell going, with Billy telekinetically disrupting her sand, until Katrina kicks him into the garden.

Billy rushes back towards the spell, but is stopped by Patty – and Katrina restrains weremummy again. And they manage to hold them down long enough to finish the spell.

And that’s when Billy’s true demonic form is revealed. He mutters a spell to magically steal Patty’s strength, throws her off, and runs away.

Do I have any relatives you hadn’t mentioned?

In the aftermath, Patty questions her mum about any relatives she might have mentioned, and she reveals a brother who, jealous over her “connection with nature” [lycanthropy], sought out powers from dark occult corners, rather going off the rails, and disappearing.

Now Billy’s true form is known, it’s much easier to Elli to identify – as a Rhyta demon. They enjoy causing suffering and death, and are skilled in emotional control.

Mrs Hakuta also has an old photo of her brother Robin – wearing the same black/gold amulet as before. Elli identifies the amulet from her notes as a Vazerius Amulet, used for demon summoning, but it’s marked in her notes as particularly dangerous, and she’s not sure why. She sends a message to Regina, who manages to send her a message in between demonic adversaries:

Deal with the devil [summoner]

Using the two werebadger’s enhanced sense of smell, they manage to track down the estranged uncle Robin, to an abandoned hovel where he’s camping out. In between sneering and misogynistic comments, he implies the family brought his aggression on themselves, and doesn’t deny summoning the Rhyta demon to kill his relatives.

But, with a demon hoping to kill him and steal his amulet, he proposes a truce. Patty will lure the demon to somewhere it can kill Robin and use the amulet – the St. Mildrith community centre (formerly church). And together with Elli, they will trap the demon in a protective circle and banish it.

Patty finds the demon skulking around the village, and he warily accepts her offer. The demon follows Patty inside the former church when she pretends to drag Robin into it – but then lurks behind a column.

There are lots of spells slung. The demon tackles Robin, pushing him through and past the pentagram that our heroes need to keep the demon within. The mock-fighting gets real as Patty manages to grab the amulet, and is frozen by Robin. But Katrina and were-mummy (yes, she’s here too) manage to hold down the demon long enough for Elli and Robin to the complete the spell.

When Patty unfreezes, she immediately switches into were-form and advances on Robin.

But Robin Willoughby just sneers and teleports away, ready to haunt Patty’s family another day.

Ascendant campaigns can view previous versions of their pages, see what has changed (and who did it), and even restore old versions. It's like having a rewind button for your campaign.

We've already been saving your edits, so if you upgrade now you will have instant access to your previous versions. Plus, you have our no risk refund guarantee , so there's nothing to lose.

The Trail of Blood

The Stake Out Showdown in a slaughterhouse

I'm sorry, but we no longer support this web browser. Please upgrade your browser or install Chrome or Firefox to enjoy the full functionality of this site.